There was a lot of response to the root crop washer post!  We have still not completed the DIY plans for a few reasons.  First of all, it turns out that producing plans clear and complete enough to build a machine from scratch is no small task.  We are not giving up on doing it, it just is going to take some extra time, which we don’t have now that the production season is upon us.  Another reason we have not rushed to finish the plans is that Isaac Villeneuve and another metal fabricator, William Fancy, want to build and sell these washers.  Isaac is offering the original design for $1200 plus HST and William is selling his for $2000 plus HST.

Both washers are priced very, very reasonably.  Unless someone was to build a washer out of scrap metal and used components, it would cost around six hundred dollars to build Isaac’s version and considerably more to build William’s.

The original machine, designed and built by Isaac Villeneuve, was used here on the farm, then at Waxwing Farm, and then at Pleasant Hill Farm.  While it was at Pleasant Hill Farm, Cindy and David asked their friend William Fancy to build one for them.  It is the deluxe version with added safety features and a tray underneath to funnel the water away. 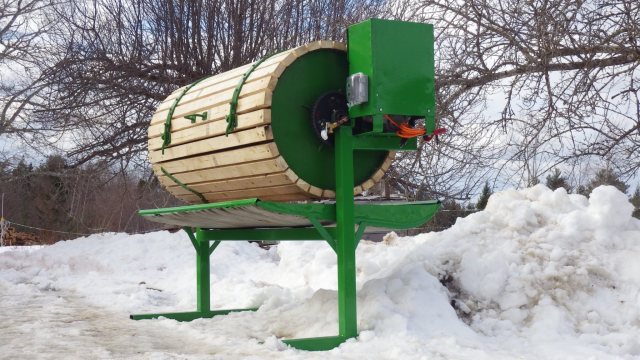 William also made one for Waxwing farm.

Cindy posted the following notice to the Westnovasmallfarm list-serve on December 17 2012, encouraging others to order root crop washers from William:

Hi Everybody,
My friend William Fancy is a machinist extraordinaire and part time farmer. He looked at the barrel washer that David Greenberg so kindly lent us,suggested a bunch of smart modifications , and said he could build them for about $2000 + HST. They will not have a belt, will have an enclosed motor, be built to the height requested, and be built with NS Hemlock. They will also be painted to retard rust, and have a chain tightener for the chain that goes to the sprocket. They can also be built with a trough underneath to catch the dirty water, with a 4 inch nipple that you can put a sewer pipe on, to direct the water away to where it can be used, instead of turning your washing station into a mudhole.
Problem is, he would like to build them over Christmas and New Year’s.. and he would LOVE to build 6 at a time. Any takers? I will vouch for the skill of his work. He has built other things for us.
You can call William to discuss this at 902-685-3990 during the day, and at 902-685-2335 in the evenings. Tell him Cindy emailed you. He built us a brilliant compost spreader, and a wood furnace for our 30 by 96 Harnois. He is practically the world authority on concrete pumps- has had to go to the Bahamas to fix them sometimes, and he repairs all the pole saws for NS power. I am not on the take, but I am buying one too.He just wants to build a bunch at once.
Cindy
Pleasant Hill Farm

If anyone reading this wants to build a washer themselves, please contact us.  We do have a rough draft of the building instructions that we would share with extra information given over the phone as needed.